Many men desire smoother skin and a youthful facial aesthetic, which are rarely achievable through non-surgical procedures. The male vertical facelift, or rhytidectomy, is an entirely different type of facelift, pioneered by Dr. Renato Calabria, one of the foremost plastic surgeons in Beverly Hills. This procedure was developed specifically to avoid the wind swept look that is common after traditional male facelift surgery.

Facial aging is similar for male and female patients, but there are some factors specific to the male aging process. The thickness of their skin is different, and the hair-producing areas, including the beard, are crucial. A decrease or lack of growth hormones or testosterone can cause premature aging in men.

All these factors, along with diet, exercise, genetic predisposition, gravity, and weight fluctuations, contribute to aging. According to Dr. Calabria, it makes little sense to correct a vertical downward force with a horizontal vector procedure like the traditional facelift. The best results can come from a vertical facelift, where the skin is gently pulled vertically instead of horizontally. 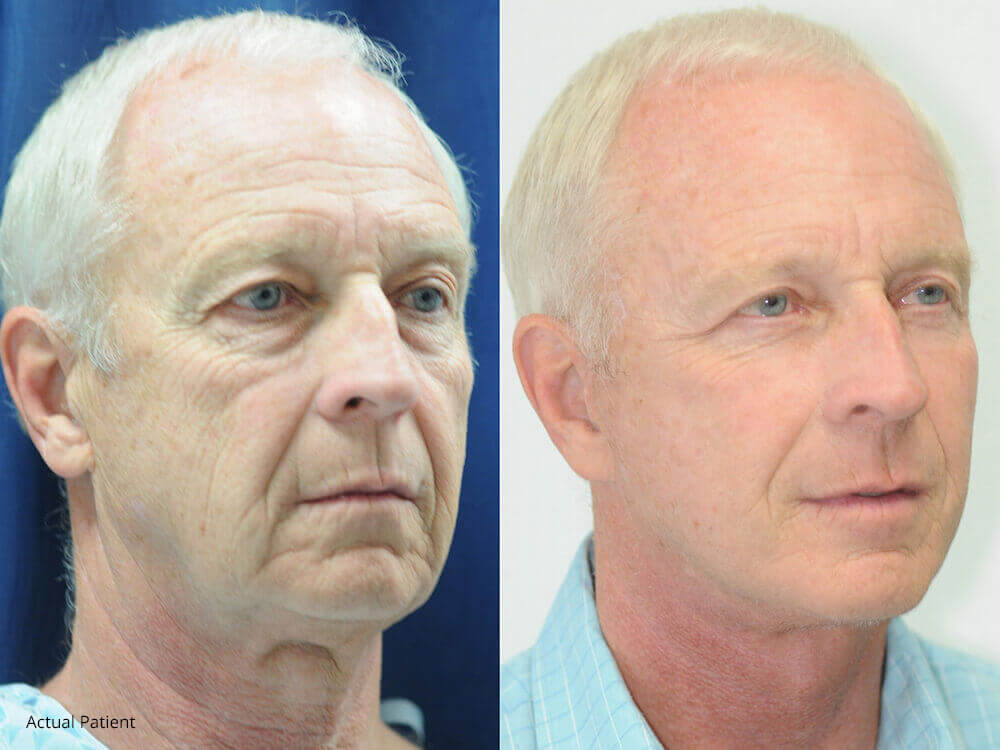 What Can a Vertical Facelift Accomplish?

What Are the Vertical Facelift Techniques?

It seems obvious that the horizontal pull frequently used in many facelift procedures can cause an unnatural result. This inauthentic outcome is magnified in the male facelift patient because of the masculine facial features, namely a shorter hairstyle and stronger bone structure. For a male patient, if the vector of pull is wrong, the results are wind blown and very evident. It is for this reason that Dr. Calabria has developed the male vertical facelift.

Incisions are made within the hairline that extend around behind the ears, and the muscles and fat are repositioned. The skin is lifted and repositioned, and any excess is trimmed. The vertical vector facelift is designed to lift deep facial structures, namely the musculature and subcutaneous fat, to their original, youthful positions.

The undermining of the superficial skin level needs to be done extensively so that the muscles of the face, namely the zygomaticus, orbicularis oris, levators, and platysma, can be sutured vertically to a more youthful position. This complicated surgical technique modifies the deep structures of the face, allowing the skin to be re-draped more naturally and avoiding an inauthentic, tight look. Natural results are Dr. Calabria’s primary concern when performing a facelift.

Patients may experience redness, bruising, swelling, and tenderness, which should subside in two or three days. Resting with your head elevated can help minimize these symptoms. Men who undergo facial rejuvenation can usually resume their usual routine within two or three weeks. Heavy physical activities should be avoided for three to four weeks. Your final results may take up to six weeks to become apparent.

Scarring is usually only found within the hairline, and behind the ears, so the scar can be concealed by the hair and natural contours of the face.

The cost of the vertical facelift depends on several factors, including the extent of correction, the type of anesthesia used, and the nature of the concerns being treated. Dr. Calabria provides a cost estimate that is tailored to your treatment plan during your consultation.

You may experience discomfort immediately after your surgery, which should improve over the following three days. Pain medication can be prescribed to improve your comfort while you recuperate.

What kind of anesthesia is used for the vertical facelift?

General anesthesia is commonly used during vertical facelift surgery. Local anesthesia can sometimes be used if only minimal correction is necessary.

How long will my facial rejuvenation results last?

Your vertical facelift results are typically long lasting. The natural aging process will continue after your surgery, but results can be prolonged with proper skincare and a healthy lifestyle. You can view facelift before and after images to see similar results in different male patients.

Can I combine other procedures with my vertical facelift?

If you would like to address additional concerns, then you may choose to include facial implants to add more definition to your facial contour, upper blepharoplasty to correct heavy, sagging eyelids, lower blepharoplasty to fix baggy, puffy eyelids and dark circles, or a brow lift to improve drooping eyebrows and wrinkled forehead skin. Discuss what bothers you with Dr. Calabria during your consultation to see which procedures can benefit you.

Does the vertical facelift address neck sagging and banding?

Vertical neck banding and sagging skin can be corrected with a neck lift, which addresses these concerns and can be combined with a vertical facelift.